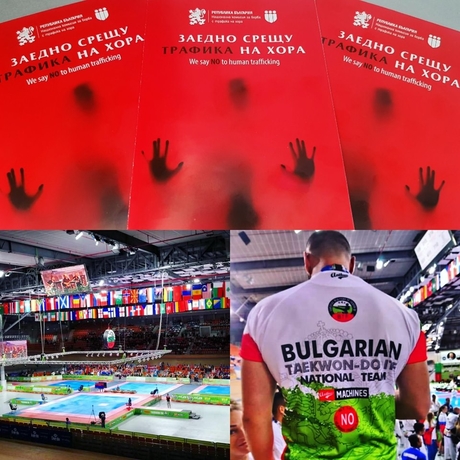 During the preparation camp of the national team, the secretary of the Local Commission for Combating Trafficking in Human Beings - Blagoevgrad, Mrs. Lubka Kostadinova, held an information meeting with the 68 contestants, which was intended to inform the audience about the crime of trafficking in human beings and the types of exploitation. In addition, the importance of raising public awareness as an effective way to limit trafficking in human beings and reduce the demand for services provided by victims was emphasized.

The official opening ceremony of the 21st World Cup took place on 25th of August 2019 in the Kolodruma Hall, Plovdiv. The competitors from the Bulgarian national team were wearing T-shirts with the motto of the campaign "We say NO to human trafficking". Meanwhile, the advertisement clip for the Bulgarian hosting also included the message.

More than 3,000 Bulgarian and English brochures were disseminated during the Championship, especially designed for the event by the LCCTHB - Blagoevgrad and the National Commission.